(KNSI) – A St. Cloud paralympic champion brought home a silver medal in his first international competition in a year.

“I was excited to put the red, white, and blue jersey on and compete for Team USA. Quite amazing.”

The races were held last week. 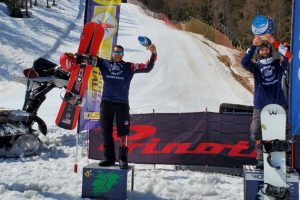 Schultz says due to COVID, he hasn’t been competing much, but he’s still been practicing at home.

“I’ve done a ton of training here in Minnesota at my home hill right in our backyard, Powder Ridge. It’s obviously not a big mountain like most of my competitors are training on but, we’re able to set up some training courses and get valuable training.”

The 36-year-old spent a lot of time in the gym and Colorado to train over the last year.

The paralympic snowboarder suffered a terrible knee injury during a snowmobile competition in 2008. His left leg had to be amputated above the knee.

Shortly after his accident, Schultz was back doing what he loves, but regular prosthetics weren’t cutting it for competitive, rigorous sports.

Schultz engineered a durable and versatile mechanical knee and, in 2010, started the company BioDapt.

Now his competition can use the equipment. All four competitors in the finals in Italy were using BioDapt prosthetics designed by Schultz.

KNSI News wanted to know how he felt selling to the competition.

Jobs Board: Check out 7 gatekeeper gigs

What Is the ‘Global Minimum Tax’ Rate in Biden's Plan? | Voice of America