Moving on from Chernobyl : Regulation & Safety

Thirty-five years on from the Chernobyl accident, Ukraine and the International Atomic Energy Agency (IAEA) have highlighted their commitment to cooperation in nuclear power. Meanwhile Ukraine’s nuclear regulator has launched the start of operations at a new storage facility for used nuclear fuel at the Chernobyl site. 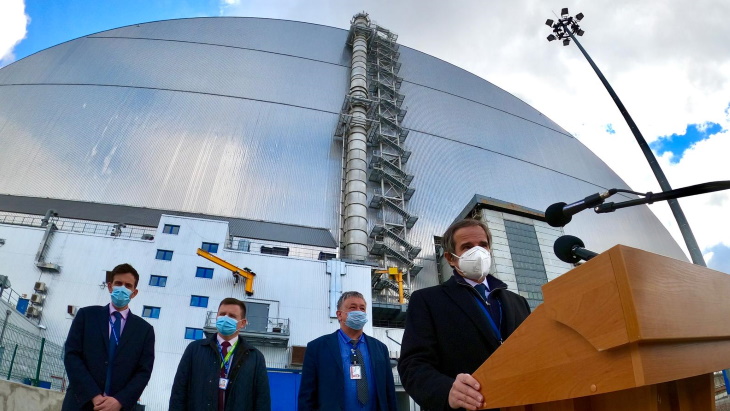 On the first day of a two-day visit to Ukraine, IAEA Director General Rafael Mariano Grossi yesterday discussed ongoing bilateral cooperation between the IAEA and Ukraine with the country’s President Volodymyr Zelenskyy and other senior officials. Today, he visited the Chernobyl nuclear power plant.

Grossi told Zelenskyy that the IAEA will continue to support Ukraine in addressing decommissioning, radioactive waste and environmental remediation in and around Chernobyl, as well as in areas in the peaceful use of nuclear technology in general.


The Ukrainian government is working on the development of the nuclear industry to ensure energy security and synchronisation of the national energy system with the energy system of the European Union, Zelenskyy told Grossi. “Today I can confidently say that Ukraine is determined to develop its nuclear energy,” he said. In particular, Zelenskyy noted that Ukraine plans to switch to the use of advanced nuclear reactors, including small modular reactors.

The President thanked the…

Jobs Board: Check out 7 gatekeeper gigs

Biden to push trillions in investment, plead for police reform in Congress speech