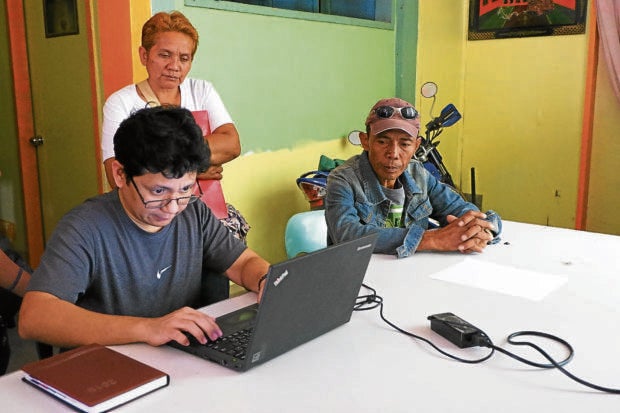 MISSING LAPTOP Lawyer Angelo Karlo Guillen interviews one of the farmers arrested in Negros Oriental in 2019. The laptop in the photo was among the items taken by his attackers. —NUPL PHOTO

ILOILO CITY, Iloilo, Philippines — The attack may have weakened him but he is not cowed.

Lawyer Angelo Karlo “AK” Guillen, who was found bloodied on a dark street in this city with a screwdriver embedded in his left temple on Thursday night, said his resolve to continue working for peasants and small workers has not diminished.

“Though difficult, we can never let fear prevent us from fighting the battles that must be fought; and the cause of human rights is certainly one worth fighting for,” said Guillen on Sunday in a first statement he issued from an undisclosed hospital in the city.

“I can’t wait to get back out there and stand beside you again. Take care to you all!,” added Guillen, the assistant vice president in the Visayas of the legal group National Union of Peoples’ Lawyers (NUPL).

Guillen, 33, could have chosen a lucrative law practice.

But the valedictorian of Iloilo City’s University of San Agustin College of Law (USA-CL) Class of 2013 chose to take the road less traveled to be able to help victims of human rights violations and injustice.

Cardi B awarded $1.25 million in defamation lawsuit against blogger

A Guide To The Kinds Of Personal Injury Lawsuit