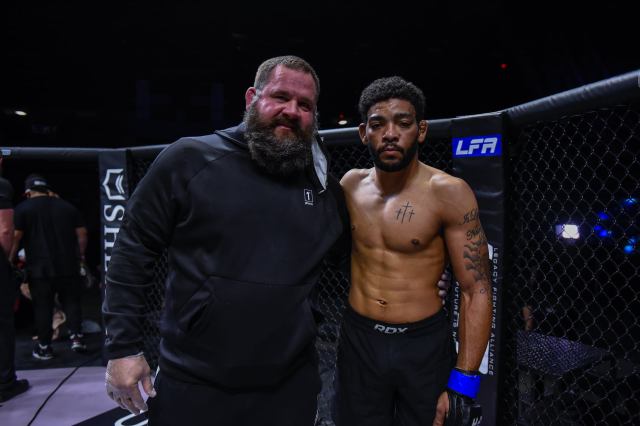 Background: Martial arts runs in the family for Lucas Clay. A life-long martial artist, Clay was introduced to combat sports at a young age by his father, who competed. Initially, martial arts was just a method of self defense for Clay – and it instilled confidence in him. The turning point for Clay was when he saw the movie “Never Back Down.” After he saw it, the pursuit of mixed martial arts competition officially began. He tried a couple of classes and “the bug bit.” There was no looking back. Now, one of the United States’ top regional lightweights, Clay’s body of work has been built up.

The Skinny: Clay is a fun fighter with very solid wins. Training out of St. Charles MMA, Clay has already beaten multiple fighters (J.J. Okanovich and Mike Breeden) who have competed on Dana White’s Contender Series. A plumber during the day and a full-time father, Clay’s work ethic is A-grade, despite the toll it takes on his body. At age 25, Clay has not even come close to scraping his potential ceiling. Though he struggles to find opponents, Clay is hoping LFA will solve that issue – and he’ll be booked against undefeated Evan Elder (5-0).

In his own words: “You have no idea how many times I say yes to fights and I hear nothing. I’ll get a text on my phone from my coach or manager or some buddies who…

After decades in woods, New Hampshire man forced from cabin